Trials of Faith (Trials Against Faith)

TRIALS OF FAITH (Trials Against Faith)

See also: Trials by the Flesh
We live in a redeemed world that still has the faults.

When we are tested and tried, we are tempted to step out of Jesus and back into our own way of doing things. God will NEVER tempt us to step out from Jesus Christ! No, it is the WORLD that tries us and tempts us. We have been made perfect in Christ by the Grace of God and the Faith of Jesus. Christ perfected Faith for us that we need not doubt that we have that same Faith gifted to us, for us. Why would God need to test His own perfection?!

Galatians 2:15-21
We who are Jews by nature, and not sinners of the Gentiles, knowing that a man is not justified by the works of the law, but by the Faith of Jesus Christ, even we have believed in Jesus Christ, that we might be justified by the Faith of Christ, and not by the works of the law: for by the works of the law shall no flesh be justified. But if, while we seek to be justified by Christ, we ourselves also are found sinners, is therefore Christ the minister of sin? God forbid. For if I build again the things which I destroyed, I make myself a transgressor. For I through the law am dead to the law, that I might live unto God. I am crucified with Christ: nevertheless I live; yet not I, but Christ liveth in me: and the life which I now live in the flesh I live by the Faith of the Son of God, who loved me, and gave himself for me. I do not frustrate the grace of God: for if righteousness come by the law, then Christ is dead in vain.

James 1:2-8
My brethren, count it all joy when you fall into various trials, knowing that the testing of your faith produces patience. But let patience have its perfect work, that you may be perfect and complete, lacking nothing. If any of you lacks wisdom, let him ask of God, who gives to all liberally and without reproach, and it will be given to him. But let him ask in faith, with no doubting, for he who doubts is like a wave of the sea driven and tossed by the wind. For let not that man suppose that he will receive anything from the Lord; he is a double-minded man, unstable in all his ways.

James 1:12-15
Blessed is the man who endures temptation; for when he has been approved, he will receive the crown of life which the Lord has promised to those who love Him. Let no one say when he is tempted, “I am tempted by God”; for God cannot be tempted by evil, nor does He Himself tempt anyone. But each one is tempted when he is drawn away by his own desires and enticed. Then, when desire has conceived, it gives birth to sin; and sin, when it is full-grown, brings forth death.

James 1:16-18
Do not be deceived, my beloved brethren. Every good gift and every perfect gift is from above, and comes down from the Father of lights, with whom there is no variation or shadow of turning. Of His own will He brought us forth by the word of truth, that we might be a kind of firstfruits of His creatures. 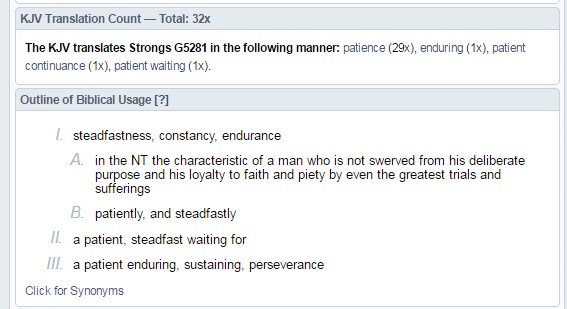 One of the misconceptions I had, was the synonymous phrase Kingdom of God / Kingdom of Heaven. I had always contributed & misunderstood this to mean the Heaven after a person leaves this earth. So everytime I read where a person "would not enter the Kingdom of Heaven" because of some act of sin, it made me sin-conscious. And it gave me an 'us-and-them' mentality.

I would think & define my belief system around a concept of "at least I wasn't committing those kinds of sins...I'm better than them". This is exactly what the Pharisees did. It showed my heart in me, and that was not God's heart in me. I had to be set free from that mindset--and this is what the Holy Spirit did in me when the truth of what that Kingdom really is became a revelation. And it set me free to Love more, and not judge more.

All our fleshly sins have been forgiven at the Cross. Christ's Righteousness is to all people.

But the Kingdom is not a place we are going to, it's an existence now. And not something external, it is internal in a person. Jesus & Paul (both through the Holy Spirit), tell us what the Kingdom really is:

The Kingdom is not a physical place or physical things about us (this world, the animals, plants, & things). No, the Kingdom of God is His presence in us!

Romans 14:17
For the kingdom of God is not meat and drink [things & objects or rituals]; but righteousness, and peace, and joy in the Holy Ghost.

And because the Kingdom of God is here & now on this earth for those that receive it; the rewards of 'His' are now, not of 'his' to come in the hereafter.

Matthew 16:24-28
Then Jesus said to His disciples, “If anyone desires to come after Me, let him deny himself, and take up his cross, and follow Me. For whoever desires to save his life will lose it, but whoever loses his life for My sake will find it. For what profit is it to a man if he gains the whole world, and loses his own soul? Or what will a man give in exchange for his soul? For the Son of Man will come in the glory of His Father with His angels, and then He will reward each according to his His [Christ’s] works. “Assuredly, I say to you, there are some standing here who shall not taste death till they see the Son of Man coming in His kingdom.”

Galatians 3:22
But the scripture hath concluded all under sin, that the promise by faith of Jesus Christ might be given to them that believe.

Acts 2:1-4
And when the day of Pentecost was fully come, they were all with one accord in one place. And suddenly there came a sound from heaven as of a rushing mighty wind, and it filled all the house where they were sitting. And there appeared unto them cloven tongues like as of fire, and it sat upon each of them. And they were all filled with the Holy Ghost, and began to speak with other tongues, as the Spirit gave them utterance.

Luke 3:15-17
And as the people were in expectation, and all men mused in their hearts of John, whether he were the Christ, or not; John answered, saying unto them all, I indeed baptize you with water; but one mightier than I cometh, the latchet of whose shoes I am not worthy to unloose: he shall baptize you with the Holy Ghost and with fire: whose fan is in his hand, and he will thoroughly purge his floor, and will gather the wheat into his garner; but the chaff he will burn with fire unquenchable.

1 Corinthians 3:9-15
For we are God’s fellow workers; you are God’s field, you are God’s building. According to the grace of God which was given to me, as a wise master builder I have laid the foundation, and another builds on it. But let each one take heed how he builds on it. For no other foundation can anyone lay than that which is laid, which is Jesus Christ. Now if anyone builds on this foundation with gold, silver, precious stones, wood, hay, straw, each one’s work will become clear; for the Day will declare it, because it will be revealed by fire; and the fire will test each one’s work, of what sort it is. If anyone’s work which he has built on it endures, he will receive a reward. If anyone’s work is burned, he will suffer loss; but he himself will be saved, yet so as through fire.

1 Peter 1:5-7
[We] are kept by the power of God through faith unto salvation ready to be revealed in the last time. Wherein ye greatly rejoice, though now for a season, if need be, ye are in heaviness through manifold trials: that the trial of your faith, being much more precious than of gold that perisheth, though it be tried with fire, might be found unto praise and honour and glory at the appearing of Jesus Christ:

Hebrews 6:1-2
Therefore leaving the principles of the doctrine of Christ, let us go on unto perfection; not laying again the foundation of
repentance from dead works (self-righteousness / self-ability),
and of faith toward God,
of the doctrine of
baptisms,
and of laying on of hands,
and of resurrection of the dead,
and of eternal judgment.
Posted by cBadenhorst at 7/03/2016 08:29:00 AM No comments:

Donate through Provisions of Grace Non-Profit via PayPal Giving Fund

Born in Somerset West, South Africa, our family immigrated to the United States right before I turned three. Except for one brief move back to the Joburg area in 1989-1990, I have lived in the Dallas, Texas Metroplex.

This is where I met Kelly, having our precious son Joshua.

The Lord placed on both of our hearts (separately) to come to South Africa for ministry & mission work under Provisions of Grace.

My family grew up in a religious Christian environment, one that was very legalistic. This led to a life of self-condemnation, guilt, shame, and low self-esteem. And I believed God was always looking at my faults, judging me, and was ready at any point to punish me for any mistake (sin) I made. If something bad happened to me (like rolls of original negatives being lost), it was because He was punishing me for a sin. But I was always trying to appease His wrath & anger by sack cloth & ashes “humility”, and even pre-punishing myself before He had a chance to: yes Lord, I will sleep on the discomfort of the floor for a week to make You “happy” with me again.

Yup, that’s the life I lived—and I lived it in my head. But it was all in my head, and not in reality that God was angry with me:

And you, that were sometime alienated and enemies in your mind by wicked works, yet now hath he reconciled in the body of his flesh through death, to present you holy and unblameable and unreproveable in his sight.

He had already reconciled me at the Cross. And in more than “some words that I read in the Bible”. No! Now they were real to me. But this reality didn’t find me, God my Father came knocking in only a way He could—He sent a messenger of Grace into my life in 2013. The Gospel was now my reality. And it took some tough renewing of my mind for me to embrace His True Good News Gospel! Hallelujah!!!

And from there, His Holy Spirit into my life!